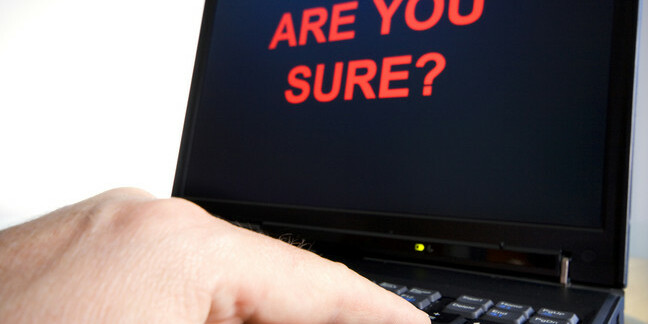 Who, Me? Welcome once more to Who, Me?, El Reg's weekly confessional column for readers with technical mishaps weighing on their minds.

This week, we meet "Sam", who made a rather big error when following what was, in his office, standard procedure.

At the time, back in 1999, Sam was less than a year into his IT career and worked at a college that ran Novell NetWare.

"We had Windows NT 4.0 workstations for the most part, and the user accounts all used roaming profiles," he said.

The team was in the process of rolling out GroupWise to all 300 or so staff, but Sam said it had been slow going because this was, largely, the first time they'd used email.

A lot of the staff, who had been paper-based for most of their careers, were "fighting the implementation tooth and nail".

Meanwhile, the college had moved over to NT 4.0 just over 18 months before, and they were seeing stability issues, especially as it related to the Novell login and roaming profiles.

Ooh, my machine is SO much faster than yours... Oh, wait, that might be a bit of a problem...

One of the common problems with the roaming profiles was best fixed by deleting them and then letting them be recreated at login.

Since home drives and desktops weren't a part of the profile, Sam said that all this did was delete the user settings, thus allowing them to recreate them.

"It was a common thing for someone to radio asking for whomever was in the office to delete such and such user's profile for this very purpose," said Sam – noting that the team had handheld radios because mobiles were too rare and pricey at the time.

So, now the scene is set, let's get down to the good stuff.

"One day, the boss was out trying to sort a GroupWise issue for one of the Vice Principals," said Sam. "The VP was not only an enthusiastic user of email but was also acting as our spokesperson for the product."

Sam's boss had decided that an upgrade to the client was the best option and was in the process of doing just that when he ran into problems with the settings and couldn't get the user logged back into GroupWise at all.

"The most likely explanation was a corrupt setting stored in the roaming profile so, as normal, he radioed back to the office for someone to delete it... Enter one numpty new boy."

Now, our new boy had deleted profiles before, so he knew what the process was.

"However, for reasons that to this day I can still not explain, I decided that what I should actually do was delete the Novell user account," Sam said in shame. "I blame the boss for giving me admin rights..."

But whatever happened happened. And soon Sam was faced with that cold, sinking feeling we all know too well – because when he saw the prompt "Are you sure?", he moved his mouse over to the "Yes", despite knowing he wasn't sure and was about to mess up big time.

"Cue a short panic while I desperately tried to work out what to do," Sam said.

Thankfully for Sam, the network guy walked in and saved his hide. "He knew the VP's password so he simply recreated the account and then deleted the profile like I should have done in the first place."

Unluckily for Sam, the veep was a regular emailer – so when the boss reconnected him to his mailbox, all of the mails had disappeared.

"Not knowing what I had done, he assumed that the upgrade had caused the fault and took the blame from the now furious user," Sam said.

Sam's boss then spent a week trying to figure out what he'd done wrong, by which point Sam was "well past the point of being able to 'fess up".

"The network guy wasn't the biggest fan of the boss so he kept my secret for me," Sam said.

Eventually, Sam did come clean. Two years later, on the boss's leaving do, after five pints.

"He didn't see the funny side."

Have you ever stayed quiet about a mistake that saw someone else take the rap? Who did you get to keep your secret? Tell Who, Me? – we promise to be discreet... ®