What Mark Shuttleworth would have wanted?

Updated As eagle-eyed readers may have noted, Vulture Central UK is on the move. Our migratory path has led us to London's Grays Inn Road and, well, you can see what was waiting for us.

We normally like to feature Windows machines in various states of distress, be it a Tesco or Boots self-service till, or the odd railway terminal having a very, very bad day.

Today, courtesy of BT's InLinkUK, we have a Linux-based device caught with its pants down on our doorstep.

InLinkUK is an outfit, which, among other things, plops ad-slinging screens on the pavement, which lure punters with the promise of connectivity. Or, in this case, an insight into the OS on which the things actually run.

For those unfamiliar with the tech, InLinkUK arrived in London in 2017, aimed at replacing British Telecom's network of payphones with Wi-Fi hotspots capable of gigabit speeds, charging ports and proffering confused pedestrians with local information. And, er, crashed boot screens.

Unlike the embedded Windows XP we often find disgracing itself in the capital, today's miscreant was running Ubuntu 15.04, aka Vivid Vervet.

Longtime readers will recall our excitement when Vivid Vervet put in an appearance back in 2015, marking the move for the OS from Upstart to systemd. What, after all, could possibly go wrong with such a shift?

Systemd issues aside, 15.04 wasn't a LTS release and Ubuntu slapped it with a nine-month shelf life, which came to an end in 2016. Three years on, we were heartened to see the Vervet still alive, kicking and requesting a login in old London town. 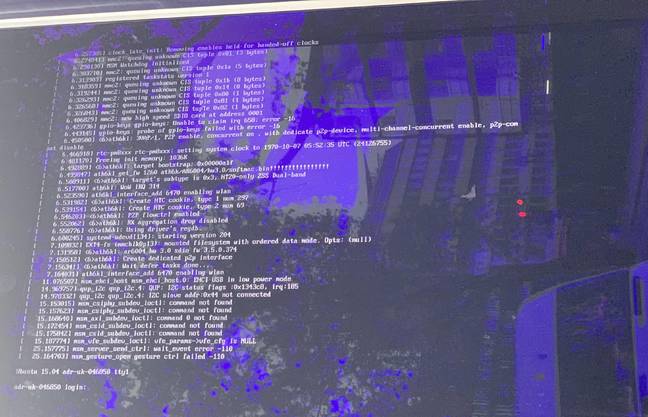 Canonical has yet to comment on one of its cobwebbed hits putting in an appearance on Grays Inn Road, more than three years after it was supposed to have been put out to pasture.

And InLinkUK? We were assured that the "team will troubleshoot the ad display near your office".

But as for what had happened, and why they were running on an apparently long-obsolete version of Ubuntu, the company has remained silent. ®

A BT spokesperson got in touch to tell us: "Intersection are in the process of upgrading the operating system that supports our InLink units to Ubuntu 16.4, in the meantime Canonical are providing support with the current operating system.

"On the specific unit on Grays Inn Road – the screen was in the process of being rebooted and was back up and running soon after."

All we can say is that Ubuntu 15.04 takes a lot longer to reboot than we remember since the thing was still looking decidedly queasy 24 hours later.