The Reg talks to Carolyn Porco, Garry Hunt, Alan Stern about the picture that almost wasn't

Special report Thirty years ago, the Voyager Project celebrated 14 February not with a card, but with a family portrait of the Solar System, which would give rise to the celebrated "Pale Blue Dot" concept. The Register spoke to the scientists involved, as well as those who might snap a future image.

For all its impact, the iconic image might not have been captured at all were it not for some determined team members.

The Voyager project, as originally approved, was only going to involve a flyby of the gas giants Jupiter and Saturn after a descoping of NASA's dreams of a Solar System Grand Tour. Launched in 1977, the probes passed Jupiter in 1979 with Voyager 1 performing a flyby of Saturn and its moon, Titan, in 1980. Voyager 2 made its Saturn flyby in 1981.

Fortunately for planetary science, saner heads prevailed and funding continued past the Jupiter and Saturn encounters. Voyager 2 continued on its trajectory to Uranus in 1986 and Neptune in 1989, thanks to forward-thinking scientists and some excellent engineering in the previous decades. Voyager 1, on the other hand, was leaving the Solar System on a course that could allow the probe to turn its imaging platform back toward Earth and capture a "family portrait" of the Solar System before the cameras were turned off for the final time.

Speaking to The Register, planetary scientist Dr Carolyn Porco, who became an official member of the Voyager team in October 1983 and would later lead the Cassini imaging team, recalled the challenge in persuading those in charge that such an image was worthwhile. Unbeknownst to Porco, both she and the late Dr Carl Sagan, had the same idea, but neither were initially aware of the other's efforts.

"I tried it in 1984 and 1985," Porco told us, speaking about the suggestion. "I thought it would be great to take a picture of the Earth and in fact the whole Solar System from afar, not only because it just would be a great sentimental thing to do as Voyager was heading out, but I had this idea that it would be cool to show everyone what the Solar System would look like from [the perspective of] an alien arriving here from another stellar system."

A nice idea that ran directly into a brick wall. The reaction from the Voyager project was simple, as Porco recalled: "If there's no science in this, then you won't be able to do it." There was also the risk that should something go wrong when the imaging platform was swung to look back at the Solar System, the probe might permanently lose contact with Earth.

Unknown Porco at the time was the fact that Sagan had also been trying since 1981 to persuade the powers that be that such an image would be worth capturing.

"I had spoken to Brad Smith [Voyager Imaging Team Leader] about this in about '83 or '84, and he didn't tell me that Carl had proposed it already!" laughed Porco. Smith was encouraging and explained how the camera needed to be shielded from the Sun (the optics could be damaged) and the spacecraft turned, "but didn't tell me there was another effort under way. So I continued for another two years to hawk the idea around the project."

A 1988 letter from Porco (and now in the Library of Congress) to Sagan, informing him that she too had proposed the idea as late as 1985, gives a feel for the resistance encountered from those keen to squeeze every last drop of science from the mission. Sagan responded by asking Porco to help his efforts by calculating the required exposure times for the images.

Her suggestion knocked back, Porco instead submitted a proposal in 1985 to have Voyager image the dust bands discovered in data from the Infrared Astronomical Satellite (IRAS) from a different angle (outside the asteroid belt). The observations were made in 1987 "It didn't turn up any IRAS dust bands, but that observation did get done," recalled Porco. Another proposal to use the probe's cameras to capture Halley's Comet wasn't approved.

In the meantime, Sagan, with the help of a few advocates on the Project, continued his efforts to get what would become the Pale Blue Dot sequence added to the mission despite the request repeatedly being turned down.

Finally, in 1989 (and thanks in no small part to Sagan's clout and skill at managing the politics of the agencies), approval to take the images was given. It came in the year that Voyager 2 took its last shots of Neptune, an event that should have marked the end of camera operations if not for this one final sequence to be taken in 1990.

"Neptune," recalled Dr Garry Hunt, a member of the original imaging team, "was the end, and that was where funding was going to stop. It was turned off. It was in low-level funding for data analysis." But the funding was actually kept running for a few more months thanks to the campaigning by Sagan. "Carl Sagan," recalled Hunt, "was certainly the driver of that," adding, "he deserves all the credit he got."

As for the imaging team, at last facing the end of spacecraft operations after over a decade of success, they wanted, according to Hunt, "to do one big thing; really spectacular, before we turn it off".

"I remember [imaging team leader] Brad [Smith]," said Hunt, "actually say 'What happens if it doesn't work?' The answer is: it's our last opportunity to do something, let's go with a bang. And that was that." 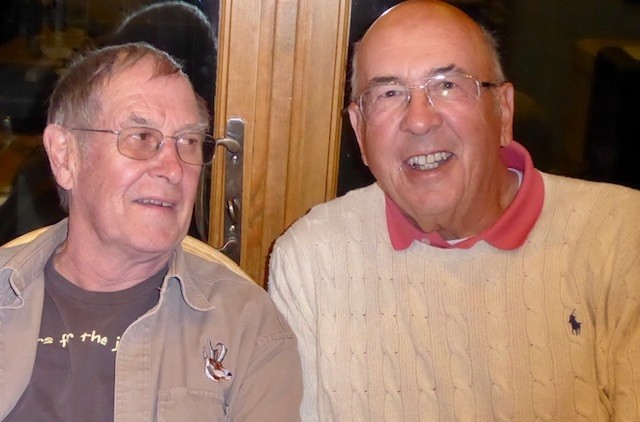 In the end, 60 frames were snapped by Voyager 1. The majority came from the wide-angle camera and Hunt recalled the close-ups (such as they were) of the planets were acquired using the 1,500mm narrow-angle camera. The images were stitched together and showed the planets Jupiter, Saturn, Venus, Uranus, Earth and Neptune. Mercury was too close to the Sun to be visible and Mars could not be seen. As for the Pale Blue Dot itself, three frames (using the blue, green and violet filters) were taken and combined to give colour.

The images, remembered Hunt, "didn't all come down for several months" – Voyager 1 was already somewhat bandwidth constrained and NASA had other uses for its Deep Space Network at the time.

Stunning? Yes and no

And the reaction when the images arrived? Hunt recalled "an exclamation that was made by all of us at the time was 'God, that is our home. We're a tiny speck amongst the stars.'"

The Register put it to Porco that the resulting image was a stunning one. She disagreed, laughing: "As images go, they're not stunning images!"

This summed up the challenge of getting the images taken in the first place. Earth would be a pixel, less even. From a science standpoint, what was the point? "How could that possibly be a good picture?" she recalled. "It's just going to be a pixel. They didn't appreciate, and maybe none of us really fully appreciated, the impact this would have."

Sagan's original idea for the image, said Porco, was to be "a picture of the Earth, and I quote, 'awash in a sea of stars'."

It didn't quite work out that way. Plans for a wide-angle frame that would have had stars didn't turn out well, since the exposure time needed to be very low to avoid excess light in the image. And, famously, the dot of the Earth ended up in a beam of light scattered in the camera's optics.

"It wasn't the best picture," said Porco, "and none of those pictures are the best."

However, she continued: "It was what Carl had to say about it. It was the way he romanced it. And the way he turned it into an allegory on the human condition is why it has since had the power that it's had." She added: "The phrase 'Pale Blue Dot' has come to signify an inspirational call to planetary brotherhood and protection of the Earth because this is our only home. And so, it all goes to Carl really why that had such a resonance."

Hunt, who continues to use the Pale Blue Dot image in his talks, told us: "To me it emphasises it is the only place in the Solar System that we can actually live. We are isolated. If we screw this place up..."

But the image itself? Hunt laughed: "It's even worse when you realise it's actually about a 10th of a pixel. It's actually sub pixel, you can see what we had to wrestle with, with what by now is incredibly primitive computing resources."

The concept of the Pale Blue Dot-type image has continued to resonate over the years. Remarking that pretty much every mission since has snapped an image of home if possible, Porco commented: "It's now de rigueur to take a picture of Earth if you have a spacecraft out there!"

While there are plenty of shots of Earth taken from Mars and even as far afield as Jupiter, there remain little from the outer Solar System, other than Voyager's image and, of course, the images from Saturn taken by the Cassini spacecraft.

Having been part of the Pale Blue Dot effort, Porco had resolved to redo the image with her Cassini cameras the moment she became team leader in November 1990. Dubbed "The Day The Earth Smiled", the image, taken on 19 July 2013, included Earth, Mars, Venus and several of Saturn's moons. A higher-resolution image was also taken with Cassini's narrow-angle camera to depict the Earth and Moon as distinct points.

Of course, Cassini had already taken an image of Earth earlier in the mission. "2006," Porco told us, "was an accident. We didn't plan it." The probe was being used to study the rings of the gas giant using filters required by the science objectives rather those needed to produce a true-colour image.

The Earth just happened to be in there.

"That picture was really the Pale Blue Dot 2.0," said Porco. However, as the mission proceeded to plan, she found herself with time to consider doing the picture she originally intended and, in the 2010 timeframe, "I looked for another opportunity to take another picture of Earth, but this time do it right, and take red, green and blue filters."

It was still a challenging endeavour. Although Cassini would be orbiting Saturn for over a decade, finding time in the science schedule to slot in an Earth image would be difficult. However, Porco came up with a new twist on the concept. Rather than say, as the scientist put it, "Hey world, guess what we did while you weren't looking?" as with the Pale Blue Dot image, "I thought, wouldn't it be a fantastic opportunity to tell everybody ahead of time that we're going to take your picture from Saturn?"

The hope was that when Cassini took the planned image of Earth from Saturn, those who wanted to be a part of the moment could look up at the sky and "just smile at the sheer joy of being alive on a Pale Blue Dot", knowing that around the world other people would be doing the same thing. And, with the outreach needed to make sure the public knew about the upcoming image, she figured the event would also serve as a useful teaching opportunity.

"So, we planned a mosaic of the entire ring system, which included a view of Earth," said Porco. "We used red, green and blue filters, and we were able to do not only wide-angle images, but narrow-angle images." 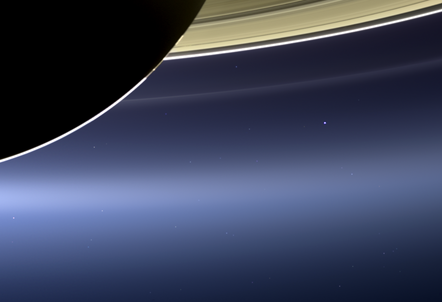 Released to the public by the Cassini Imaging Central Laboratory for Operations (CICLOPS) on 12 November 2013, the image was also used as a base for a collage of approximately 1,600 images submitted by the public "waving at Saturn".

Next page: The next family portrait
Page: