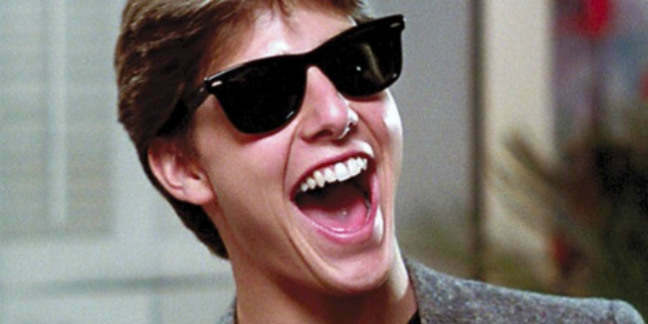 NASA Administrator Jim Bridenstine has confirmed that sofa-jumping Top Gun star Tom Cruise is working with the agency on a film aboard the International Space Station (ISS).

Yes, we had to check our calendars too, but we'd already done the Saturn V thing back on 1 April. Our sources have confirmed that Tom's people, Elon's people and Jim's people are talking about a real space-based project for the Eyes Wide Shut star.

Should be a lot of fun!

Cruise has form on the ISS front, having narrated the rather good 2002 IMAX 3D film, Space Station 3D, which dealt with the construction of the orbiting laboratory. Although for our money, 1985's The Dream Is Alive IMAX emission benefits from being from a more ambitious era of Shuttle operations, having a Walter Cronkite commentary and no 3D.

As for Cruise, it appears that his team will work with Elon Musk's rocketeers on the project, the details of which remain unclear at present. It's also not the Vanilla Sky star's first crack at trying to do something in the heavens. In an interview with Empire magazine, 3D Smurf aficionado James Cameron said that he and Cruise were in discussions about making a feature film aboard the ISS back in 2000.

Those conversations came to naught, and the Titanic director went on to produce Steven Soderbergh's directorial take on Stanisław Lem's novel Solaris before diving into documentaries and eventually inflicting Avatar on the world.

Should the project come off (and to our tiny vulture brains it is only marginally more likely than NASA managing to get American boots on the Moon's surface by 2024) it would be highly unlikely that Cruise would be shoehorned into one of Musk's Crew Dragons any time soon. Cruise himself is in the process of filming Mission: Impossible 7 and Musk has yet to manage to actually launch any humans into space yet. Then there is the sheer expense involved.

Cruise would also be wise to remember that if he hopes that such a mission might add a couple of inches to his stature, Scott Kelly style, the extra height will sadly not stick around for long.

The tech world has had its share of space tourists over the years. Canonical boss Mark Shuttleworth took a trip to the ISS in 2002 while Richard Garriott, video game developer and son of Skylab and Shuttle astronaut Owen Garriott, went up in 2008.

We're sure there are other tech moguls and billionaires that could do with being fired into space. We might even let some have a spaceship. ®