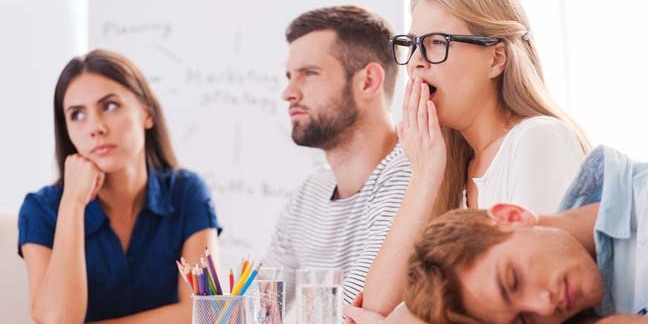 Nine weeks online with Google Cloud: what could be more absorbing?

Next on Air As the tech industry ponders how to hold virtual events in place of the usual big barn jamborees, Google has come up with its own take on death by G Suite Slides: a nine-week digital event called Next on Air.

Microsoft is wrapping up its own virtual Build event today after just 48 hours, but that is not enough for the cloud number three, which believes it can hold industry attention for two whole months.

The Chocolate Factory originally planned an in-person event in San Francisco, but following the COVID-19 crisis, this mutated into what was to be Google Cloud Next Digital Connect on 6-8 April. Not long after, those plans were also scrapped, with Google saying that it would "hold the event when the timing is right."

Apparently that time comes in July, and again in August, and again in September. From 14 July to 8 September, the company is promising keynotes and "learning opportunities" pitching its services. Each week brings a different topic, varying from the vague wibble of "Industry Insights" in week one, to security (week 4), data analytics (week 5), data management (week 6) and week 8's cloud AI. The seventh week is devoted to "Application modernization", which at Google is code for its Kubernetes-everywhere initiative Anthos.

Our pick for the best chance of hearing something new is week 2, on "productivity and collaboration", which kicks off with veep Javier Soltero offering a "window into our newest innovations". Products covered include G Suite, Android and Chrome in business, Chrome OS, no-code development, and even a session on "the future of meetings in G Suite: Vision and roadmap" where you may learn how to hold your own virtual event.

The risk for Google, though, is that over such a lengthy period we will find it hard to see the difference between what is on offer during Cloud Next, and the normal flow of announcements, training and marketing. ®