You may know them as ‘SmartNICs’ or ‘DPUs’. Intel plans to make ‘em and software that lets 'em drive virtual networks and storage at scale

Intel has added “infrastructure processing units” (IPUs) to its list of must-have data centre infrastructure, and promised it’ll build more of them and offer software to put them to work.

IPUs also go by the name “SmartNICs” or “data processing units” (DPUs). As The Register tried to explain in September 2020, DPUs/IPUs/SmartNICs are network cards with enough processing power and storage to relieve a server’s CPU of boring background work.

Hyperscale cloud operators cottoned on to DPUs/IPUs/SmartNICs early because they make money renting out CPU cores to their clients, but some of those cores are kept busy running a cloud’s plumbing. Shifting necessary workloads like chatting to storage devices or running a firewall onto a DPU/IPU/SmartNIC means clouds have more cores they can rent for profit. DPUs/IPUs/SmartNICs are also pleasingly isolated from servers themselves, so the big clouds use the devices to run their own cloud plumbing and as a side benefit get to point out that their own workloads are helpfully separated from the data and applications you run on their servers.

Intel on Monday re-iterated that back story at an event called “Six Five Summit”, claimed it is the “volume leader” in the category thanks to work with Microsoft, Baidu, JD.com and VMware, and said that in a modern and efficient data centre IPUs will sit alongside CPUs and the many-core-and-multi-technology “XPUs” that Chipzilla advances as necessary for finicky workloads.

The company also pledged it would soon offer more IPUs based on its FPGA tech, custom ASICs, and the Xeon D it already bakes into such products, plus a “powerful software foundation that allows customers to build leading-edge cloud orchestration software” that eases users’ path to software-defined networks and virtual storage. 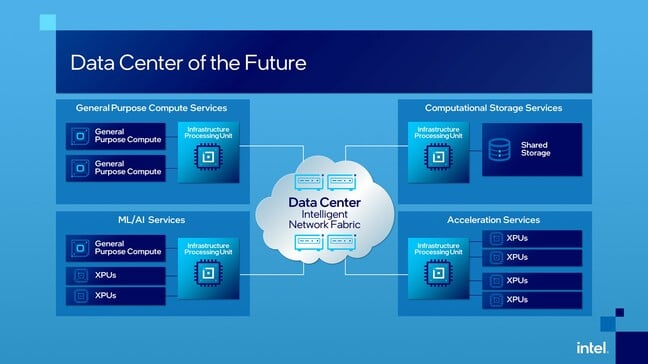 That software may be more interesting than Intel’s hardware, because today hyperscalers tend to develop their own software infrastructure and mostly keep it all-but-secret. If Intel delivers an IPU-at-scale orchestration platform, it strides into competition with the likes of OpenStack and VMware.

Intel said its intention is to sell this stuff to cloud customers. Doing so would certainly give those customers good reasons to stick with Xeons, or at least keep Intel inside any Arm servers they deploy because there’ll be Chipzilla tech on an IPU hanging off every motherboard.

And the rest of us? For now, it’s hard to find a workload to run on a DPU/IPU/SmartNIC. VMware thinks you might fancy a firewall on the devices and NVIDIA sees them as essential to make AI sing, but other major players are yet to signal mainstream applications for the devices. ®