Earlier today, retired Microsoft operating systems engineer Dave Plummer, who coded Task Manager back in the glory days of Windows NT 4, showed off in the video below the 2022 redesign of Task Manager. As we reported last month, Redmond has been working on overhauling the OS component.

Task Manager has changed over the years, certainly from the green phosphor-inspired lines of Plummer's original. "Upgrades to Task Manager were one of the few good things to come out of Windows 8," he remarked. Harsh, but fair.

Fans of dark-mode user interfaces could do worse than take a look at Windows 11 build 22557 in the Windows Insider Dev Channel for the Task Manager makeover, unless they are one of the dozen or so users of Windows on Arm – this Insider build does not, alas, work on that kit. 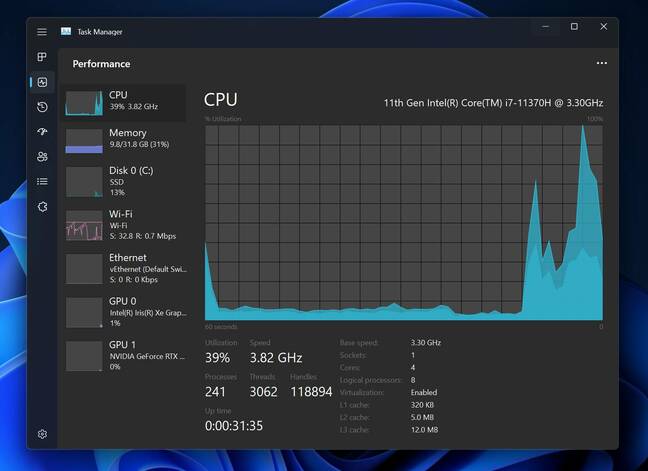 The Windows Task Manager in its dark-theme mode ... Click to enlarge. Source: Microsoft

The build is chock full of other toys for Windows Insiders to play with, some of which might make it to a mainstream release over the coming months. Folders are possible within the controversial Windows 11 Start Menu, and Do Not Disturb and Focus options have been introduced to deal with pesky notifications. OneDrive integration has been improved in File Explorer with sync status and quota usage available. We asked Microsoft what this meant for cloud storage rivals like DropBox and will update this piece should the company respond.

Other improvements that will dampen down at least some of the complaints over the Windows 11 shell include Drag and Drop support for the taskbar and improvements to snap layouts. However, it is the buffing given to Task Manager (including a new efficiency mode to limit app resource consumption) that caught our eye this time around.

"So far as I can tell I think my code is 90 per cent still there," Plummer told The Register, "as the framework of the application and the way it works is all still there." The original Task Manager had minimal dependencies, while later iterations (and particularly this one) need considerably more libraries. XAML – which is Microsoft's GUI description language, now used by the redesigned Task Manger – doesn't come for free.

So it looks nicer, though any bugs in the stack will show up, meaning that today's Task Manager can't help but be less resilient than the pared-down process-killer of old.

"I had a feature in there that they took out," explained Plummer, "as soon as the Tasman process began it would switch its priority to high so that it could bring up its main window quickly and do what you wanted to do.

"For performance reasons I think they took that out, and now Taskman competes for resources just like the cannon fodder that you're trying to clean up. So it can take a while to get started now and be a little slow to use."

A little slower it might be, but with attention paid to the Windows themes and navigation consistent with the rest of the operating system, it's also pleasing on the eye. And if you don't fancy a dalliance with the bleeding edge of Windows 11 on the Dev Channel, you could do worse than take a tour through the new Task Manager hosted by the guy that wrote the thing in the first place. ®