Pics Each colored speck or oval-shaped orb dotting the background in each image collected by the James Webb Space Telescope (JWST), and released on Tuesday, is an individual star or galaxy somewhere deep in the universe.

Over Christmas, after decades of work, the $10-billion telescope was finally launched into space and sent to orbit the Sun at a gravitationally stable point 1.5 million kilometers from Earth. After unfurling its 22-metre (70-foot) sunshield, it snapped its giant gold-plated hexagonal mirror in place for its detectors to begin absorbing its first light.

Photons from objects forged over 13 billion years ago bouncing off the space observatory's mirrors are being redirected into its instruments. A collection of cameras take snapshot views of deep space, while spectrometers study the frequencies of the detected light to get an idea of the chemical composition of what we're seeing.

Now, the first images taken by the JWST have arrived revealing some of the most spectacular cosmic phenomena unfolding in space. These photos, which took hours to capture and are a composite of many images, were published online this week by NASA and its friends after the very first snap was revealed on Monday. Let's run through them.

The Carina Nebula [full-res sources] is pictured below. The sprawling orange-brown stuff is a gigantic wall of dust carved by ultraviolet radiation and stellar winds blasting from numerous hot, massive young stars. The carpet of dust is the edge of a cavity surrounding a bubble housing a thriving stellar nursery, known as NGC 3324, above an area surrounded with bright ionized gas. The highest points of the cavity stretch about seven light years from top to bottom in the image. 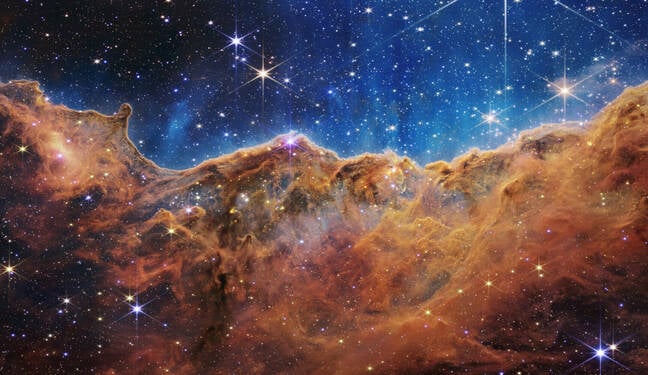 The Carina Nebula, as snapped by the JWST ... Click to enlarge or see article links for super-high-resolution.
All images credited to: NASA, ESA, CSA, and STScI

The death of a star can be just as dramatic. The Southern Ring [full-res sources] is a planetary nebula, where a star located 2,500 light years away has been shedding an envelope of gas and dust for thousands of years as it withers away slowly. The image on the left is from the JWST's Near-Infrared Camera (NIRCam), and the on the right is from its Mid-Infrared Instrument (MIRI). Viewing the object in slightly different wavelengths reveals new features – such as two stars in orbit at the center in the image on the right.

Left, JWST's NIRCam image of the Southern Ring, and right, the MIRI shot

The JWST's largest image [full-res source] features Stephan's Quintet – a collection of four galaxies (NGC 7317, NGC 7318A, NGC 7318B, and NGC 7319) about 290 million light years away from us; and a fifth galaxy, NGC 7320, on the left-hand side of the picture, which is actually much closer, at 40 million light years from Earth. The swirling mass showcases how galaxies can interact with one another, colliding with each other to spur new star growth. Here's a link to the same picture snapped by the Hubble Space Telescope for comparison. 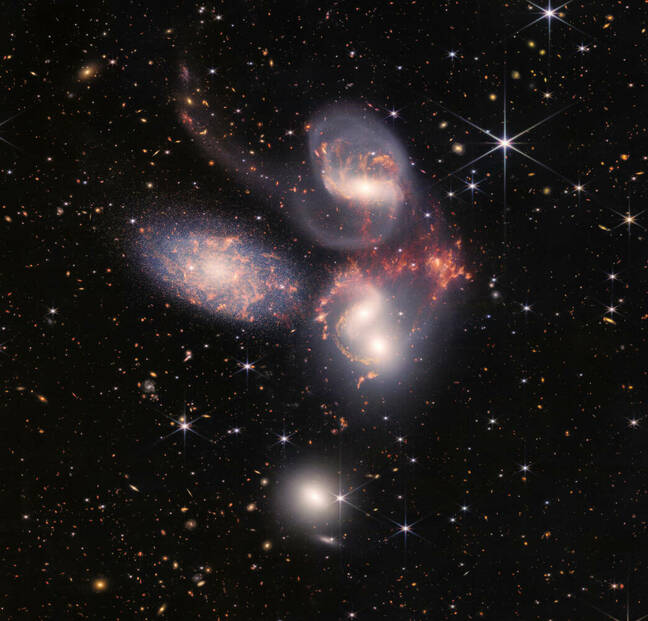 Finally, the fourth image released on Tuesday is actually a graph detailing the light spectrum of WASP-96b, an exoplanet 1,150 light years away. Despite being 1.2 times the diameter of Jupiter, it contains less than half the mass, making WASP-96b essentially a massive puffball of gas. The spectrum reveals the exoplanet harbors water, and has a hazy atmosphere that contains clouds. 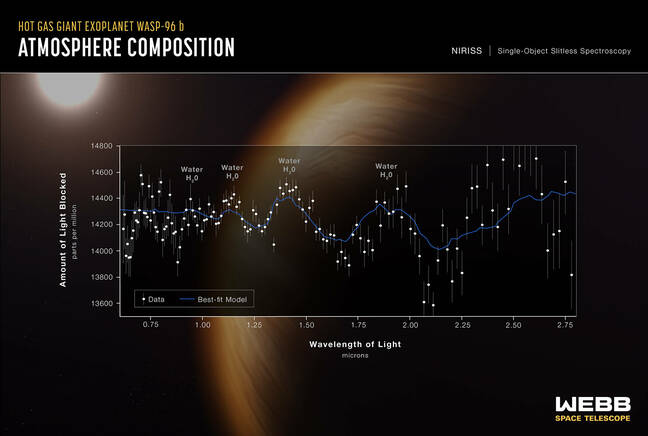 These four images aren't just pretty pictures: a panel of experts at a NASA briefing explained on Tuesday the snaps are proof the JWST works. It can capture light from the most distant galaxies, born over 13 billion years ago when the universe was young, to otherworldly exoplanets nearby.

"How could you not discover stuff if you're a hundred times more powerful than previous telescopes," Jane Rigby, the telescope's project scientist for operations, enthused at the briefing. "From the data that I've seen so far, from the work that we've seen … the first week of science is going to be revolutionary. These are incredible capabilities that we've never had before."

The telescope could help cosmologists study the expansion of the universe. Rigby said the probe could measure the light from Cepheid stars, red giants, and galaxies to calculate their accurate distances away from Earth, allowing researchers to estimate Hubble's constant – a hotly contested measure of how fast the universe is expanding.

As humanity's most powerful infrared telescope, the JWST will allow astronomers to get a wider, deeper view of the universe at the best resolution yet. Knicole Colón, deputy project scientist for exoplanet science, said there are plans to point it at the TRAPPIST system – a solar system where some planets could potentially have the right environmental conditions to support life.

"There are seven planets, and several of those are considered to be in the habitable zone of that star, which means they have the right temperature that they could have liquid water on their surface," she said. "What we are going to do is first check whether they have an atmosphere at all … If we confirm there is an atmosphere, what can we tell about the composition? It's a stepwise type of process, but that's our prime opportunity to study some potentially habitable planets."

For those who can't wait to see more images from the JWST, there are more being released on Thursday. The next set of snaps, however, will be more familiar to us – they will depict objects within our own Solar System. The telescope is expected to reveal never-seen-before details of the surfaces of planets. "I have no doubt that we're going to see spectacular things from the Solar System soon," said Klaus Pontoppidan, a project scientist at the Space Telescope Science Institute.

JWST's images remind us that space is mindbogglingly huge, and is teeming with more fantastical objects than we know. ®

The sky is getting crowded, but some think the FCC is moving too fast to clean it up
Networks22 Sep 2022 | 19