Brooks conceded Microsoft had made mistakes and partners got hurt on Windows Vista. But Microsoft can recover because of its rich history is in delivering operating systems, he said. "Move to Windows Vista, the time to worry about Windows Vista is over," he promised.

Microsoft is a sleeping giant which has been silent on the benefits of Windows Vista, he said. No more. "Today we are making a statement and drawing a line right here that we are going to do things differently. That we are going to tell our story," he promised.

So, can we expect a slick, and consistent TV-based campaign nailing growing Mac security vulnerabilities? The curious performance anomalies of running OS X on Intel? The hefty price tag, or lack of applications running on Mac for businesses? 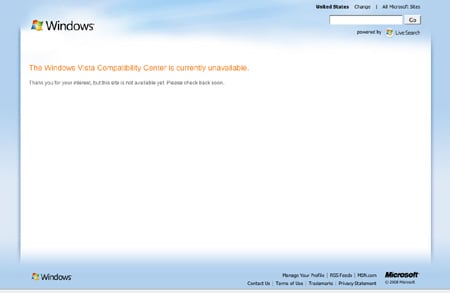 The Windows Vista fight back starts here, or not

Well, Brooks wasn't saying but there is a Windows Vista Compatibility center site where you can check what applications, drivers and hardware work with Windows Vista. At time of going to press, this was not working, although Microsoft claims 3,500 applications and 5,500 devices are compatible. Microsoft also ran an ad in newscomic USA Today announcing the Windows Vista Small Business Assurance Program. This campaign will reach a "crescendo" in the next couple of months, with Microsoft dominating the airwaves, we were promised.

In reality, this was another-year, another campaign promise to talk up Windows Vista. Unlike years past, though, Windows XP is no longer widely available through OEMs and retailers, something that had meant many partners could postpone the move to Windows Vista.

Brooks promised to support customers and partners using Windows Vista, but with Windows XP no longer officially available and free support due to end next May, what choice did Microsoft have unless it wanted the Windows PC ecosystem to stagnate?

Also, Microsoft needs to get partners familiarized with Windows Vista ahead of Windows 7, as that OS will use the same hardware specifications. "When you make an investment in Windows Vista, it's going to pay forward into the next generation of the operating system we call Windows 7," Brooks said.

Is that a threat or a promise?®