The only clues in the cabin to the increased electric range are the Eco, HV/EV and City EV buttons that sit in the same place as the Power, Eco and EV buttons on the standard model. On the exterior, some very subtle styling changes and new badges aside, it’s only the cover for the charge socket with its plug emblem that gives the game away. 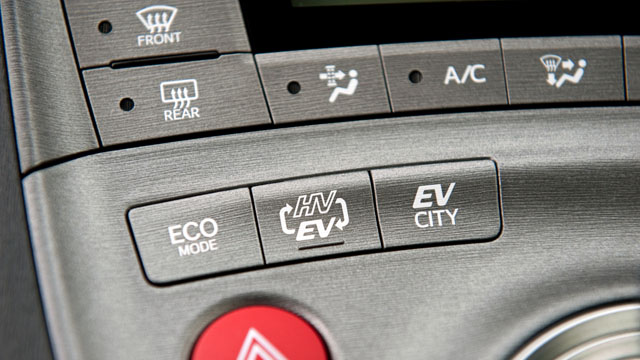 EV or Hybrid? Take your pick

Assuming the battery has enough charge, at any time the HV/EV button lets you cycle between Hybrid and Electric vehicle modes. In the former, the Plug-in Prius behaves much like the standard car, albeit one that’s been at the steroids with the electric motor assisting the petrol engine and allowing for some limited electric-only running. In EV mode the new Prius drives much like a Nissan Leaf or Vauxhall Ampera with ample electric poke available to keep up with urban and suburban traffic.

On the road, I found that EV mode could be pushed to 59mph before the petrol engine fired up, 8mph better than Toyota's claim. The range prediction was bang on though. On three successive full-charge runs the car fell out of EV mode after 15.1, 14.6 and 16.2 miles. If you charge the battery from the mains and then drive off in hybrid mode, the indicated EV capacity is held in reserve until activated. This means you can charge up at home, drive to your destination and then engage EV mode when you get there. 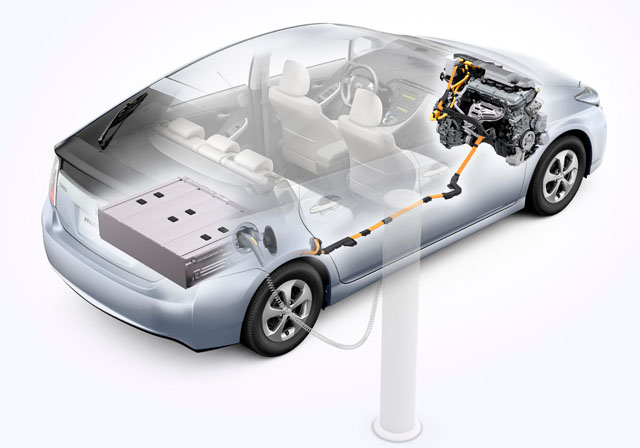 Battery at the back but drive at the front

Indeed, that’s exactly what I did on a trip to Wakefield. I held off the EV charge until I reached the outskirts of the town centre. I then engaged City EV mode whilst driving around town, nearly running a few of the locals over in the Trinity Walk car park, due to my silent approach. With City EV, you can accelerate more aggressively for short periods too. For instance, pulling away from traffic lights without the petrol engine firing up. Otherwise it’s the same as EV mode, however, the electric motor does have to be up to temperature before you can select it.

The Eco setting smoothes out the throttle response and dials back the air conditioning – all in the name of eking an extra mile or two from each gallon or kWh – and operates in EV, City EV and Hybrid modes. I suspect most drivers will leave their Plug-in in Eco unless in an almighty hurry or driving in the tropics. Once the EV charge from the mains is exhausted, theoretically, it can be replenished by the engine and regenerative brakes but, in my experience, only by a small amount. A 20 mile run added just over a mile to the indicated EV range, so any meaningful contribution would require a long and preferably downhill journey.

To help the driver make sense of all this EV/HV malarkey, the battery power indicator has two forms – a solid graphic showing the EV charge and then a segmented graphic showing hybrid charge. As soon as the EV battery graphic hits empty, it swaps to the hybrid battery graphic showing full. Even in hybrid mode though you will get more electric-only driving out of the Plug-in than the regular Prius, owing to its beefier lithium-ion battery. The best I managed in hybrid mode was 4 miles at speeds up to 40mph, significantly further and faster than the standard car is capable of.

Don't mind us, we'll just have a quick look for unsupported installs and then disappear, we pwoooomise
Software3 Feb 2023 | 13