Microsoft Office 2013 heads for the cloud but fails to soar

Review The last few versions of Microsoft Office have divided users, and Office 2013 – due to reach General Availability in the first quarter of next year but available now as a limited free trial – will likely be no different, even though it largely follows a familiar course.

Office 2007 brought us – love it or hate it – the Ribbon UI. Office 2010 streamlined the new interface and made it ubiquitous throughout the suite, further alienating those who prefer the old-style menus.

With Office 2013, Microsoft has revamped its UIs yet again – but the Ribbon is here to stay. What will likely have users talking about even more are the changes designed to align Office with Redmond's current philosophy of linking applications with subscription-based online services.

A word on that: customers will have two ways to get Office 2013 when it formally launches early next year. One will be, as with previous versions, to buy the suite as a retail product with a perpetual license. The other will be to get the application suite as part of an Office 365 subscription. There's strong evidence that Microsoft would much prefer that customers choose the latter – and judging by Redmond's aggressive pricing, many probably will.

So far, however, Microsoft has only made the Office 2013 apps available through Office 365 via a free preview, so we'll only touch briefly on the differences between the subscription and perpetual-license versions. We'll delve into that topic in more detail at a later date, once all of the subscription features are available.

For now, we'll examine the Office 2013 apps themselves and see how the perpetual-license versions are now more closely integrated with Microsoft's services. We'll also look at various other changes in the suite and how they embody the latest thinking out of Redmond – for better or for worse.

A new year, another new look for Office

It should surprise no one that Microsoft has yet again changed Office's look and feel. Given everything else that's gone on in Redmond this year, it's only natural to assume that Microsoft would give Office a full makeover to have it fit in better with Windows 8.

Curiously, however, that isn't exactly what happened.

Yes, the new Office does follow a lot of the same ideas we see in Windows 8 and Windows Phone 8. Application UIs have been scrubbed of all gradients, faux plastic, 3D rendered icons, and the like. Document windows are stark and monochromatic, with each application coded to a different color. 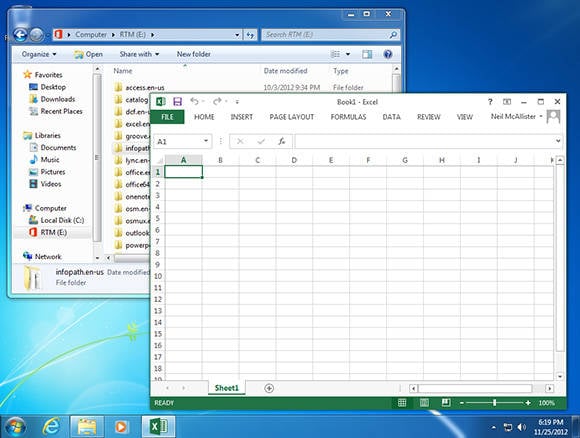 Interestingly, though, Office 2013 doesn't really blend in all that well on Windows 8. One thing you'll notice is that the menu titles are rendered in ALL CAPS, unlike the menus in the rest of the OS. Microsoft went the same route with Visual Studio 2012, and many preview users complained, albeit to no avail. I'm not a fan of the look, either.

What's more, Office 2013 windows don't look like other Windows 8 windows. Controls for actions such as closing the window or getting online help are styled differently and are located in different places. The window borders are much thinner, too, which can make windows difficult to resize, particularly on a touchscreen.

It's almost as if Microsoft developed its new visual language for Windows 8 but wasn't entirely happy with the results, so it kept working on it while Windows 8 was heading to market. Office 2013 is the result. As such, you could say Windows 8's look and feel is already out of date (at one month old). Then again, you could also say the Office 2013 apps just look quirky and out of place no matter what OS you run them on. Take your pick.

It's also worth mentioning that the Office 2013 apps are strictly desktop applications, even on Windows 8. They appear on the Start Screen as simple icons, rather than Live Tiles. The suite comes bundled with no Windows Store apps, although a Windows Store OneNote app is available as a separate download

For the most part, however, Office 2013 almost seems to have been developed without the new OS in mind.

Next page: If you didn't like the Ribbon before...
Page: