Nimble has fixed a great hole in its product line with a quartet of all-flash array products, reaching up to 2PB of effective capacity (assuming 5:1 data reduction) and 350,000 read IOPS, beating competition from Pure, EMC and NetApp/SolidFire.

Nimble offers four models: the AF3000, AF5000, AF7000 and AF9000, and each can have its SSD capacity scaled up, and also be scaled out non-disruptively into four-node clusters.

Each system has a 4U base unit and one or two 4U expansion units, each with 48 slots. They are actually equipped with 24 SSD slots, but when configured with Nimble’s Storage Dual-Flash Carrier (DFC), the capacity of each slot is doubled, meaning scope for up 48 SSDs per array head unit and expansion shelf.

This DFC unit also renders the drives hot-swappable. Pure has dual carriers but its individual drives are not hot-swappable, Pure having the option to either fail the second drive upon removal, or endure two drive rebuilds.

These drives have a single Printed Circuit Board (PCB) in a 7mm form factor.

Pure arrays and Dell’s SC Series arrays use these drives, with HPE set to be using a future 7.6TB version in its 3PAR StoreServ arrays in fairly short order. Samsung has 48-layer product in its road map and also flagged a 15.36TB product is in its development labs.

If Nimble keeps up with Samsung’s 3D development curves then tasty capacity increases should be coming.

There is a common set of data services across Nimble’s CS and AF series products and the CS and AF systems have recorded 99.9997 per cent availability, meaning up to 8 seconds a month downtime.

The four AF Series models with the hybrid CS700 for comparison

An AF array can back up data to Nimble’s hybrid flash/disk CS arrays, using snapshots and replication, and these can provide a backup, archive and disaster recovery resource for AF users. 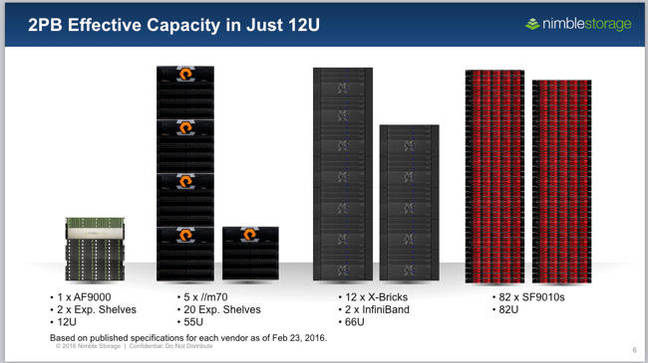 Pure says it has no scale-out capability.

Nimble products come with InfoSight Predictive Analytics to proactively deal with faults, and have all-inclusive software licensing. There is flat support pricing in years 4 and 5, and the Timeless Storage support contract has an option for a new controller after three years.

Nimble’s Predictive Insight gave it an edge in the hybrid array startup area and it will be hoping that this trend-setting support technology plus its AF Series’ capacity, performance and density will enable it to claw back its position as a leading next-generation storage array supplier.

No pricing information was released but Nimble claims its AF Series are up to 66 per cent cheaper than competing arrays on a total cost of ownership measure. Check out a Nimble staffer's blog here. ®