Bork!Bork!Bork! There is a reminder to check your outputs in today's edition of signage sileage as the actor Megan Fox finds herself upstaged by Microsoft Windows.

Snapped by Register reader Michael Wainwright, the huge example of a Windows dialog showing up where it isn't wanted can be found in Manchester. It was, according to Wainwright, "the biggest Windows desktop I've ever seen." 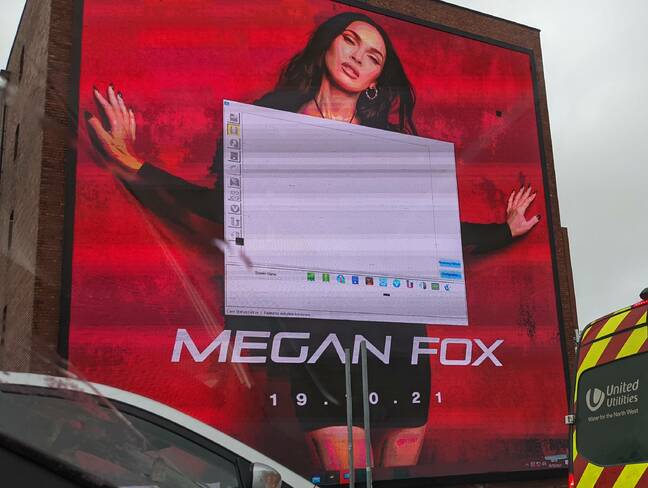 Indeed it is. We've all idly forgotten what screen it is we're controlling. Few, however, have had their whoopsie thrown up on the side of a building.

As for what is actually happening here, a look at the user interface shows a "Failed to initialize hardware" message. A few black blocks also indicate that all is not well. The same blocks turned up in subsequent images, meaning that whatever Ms Fox's image is being used to promote, it isn't a sequel to the Adam Sandler vehicle, Pixels.

Fox rose to fame as a human performer in Michael Bay's live action Transformers franchise, in which robots are capable of transforming themselves into all manner of objects. There is every chance that one might have morphed into a Windows PC. Although we fear that attempts to take over the world will end up being punctuated by that error sound.

Still, in a world where IT fans like to brag of their epic monitors, few will be able to better this bad boy. Sure, the refresh rate might make gamers queasy and, unless the erstwhile Transformers star is suffering from a particularly distressing rash, the colour reproduction is not all it might be.

But look at the size of that thing.

The Register's bork series will be coming to an end later this year with a final festive Twelve Borks of Christmas. Perhaps you've seen Windows doing a whoopsie, or a Pi flashing its posterior? Tell us all about it. ®