Pic The European Space Agency has maneuvered its Rosetta probe into the perfect position for a selfie with its target – comet 67P/Churyumov-Gerasimenko. 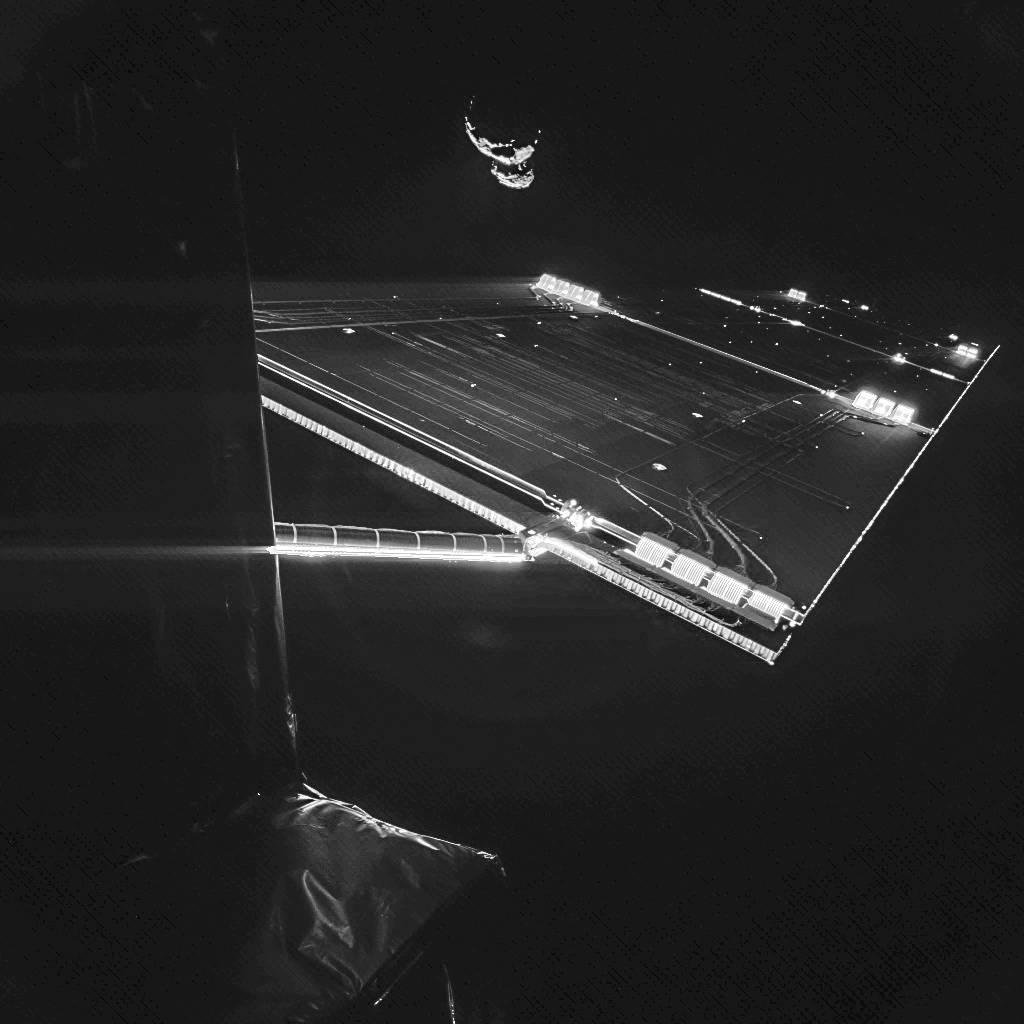 "Breaker one-nine, this here's the Rubber Duck" (click to enlarge)

The image was taken on September 7 using cameras on Rosetta's Philae lander that will attempt to touch down on the comet next month. The imaging system, which has the snappy moniker CIVA (Comet nucleus Infrared and Visible Analyzer), consists of five identical monoscopic imagers and one stereoscopic camera mounted to cover 60 degree arcs of vision.

"The selfie was taken during Sunday night from a distance of about 50 km from the comet, with one of CIVA-P’s cameras capturing the side of the Rosetta spacecraft and one of its 14 metre-long solar arrays, with 67P/C-G in the background," ESA said in a blog post.

Sitting in the background of the shot is the 10-billion-ton comet that is Rosetta's target. The 67P/Churyumov-Gerasimenko rock appears to be made up of two space boulders fused together in a collision, giving it an appearance similar to that of a rubber duck, albeit one that's 3.5 by 4 kilometres wide.

Rosetta took ten years to get into position around the comet, flying close to the Earth and Mars to pick up enough speed to catch up with the cosmic stone as it plunges towards the Sun at high speed. For the last few months ESA scientists have been surveying the comet looking for a landing site for Philae, the location of which will be announced on September 15 at a press conference in Europe.

Once the landing site has been picked the Philae lander will detach itself from Rosetta and move towards the comet at around one metre per second. When it gets close enough two harpoons will be fired into the comet's surface and these will be used to affix the probe to its target.

Once the lander is in place, its ground-penetrating radar, drilling equipment, and an on-board science laboratory will analyze the comet's composition. The comet has already surprised scientists with its dusty outer shell and it is hoped the interior will yield more data to help us understand these orbiting snowballs. ®