Elevating bork to a new level (if the touchscreen worked)

Who needs pesky buttons when the Internet of Bork is here?

Bork!Bork!Bork! There are times when a bork is elevated from amusing to downright sinister. What code is lurking behind the scenes on your elevator?

Register reader Rob Dyke spotted today's example of messages you don't want to see in an elevator while traversing the floors of London's Walkie Talkie building (or 20 Fenchurch Street).

The structure, nicknamed "Walkie Talkie" on account of its curious appearance (sounds better than "Projector Of The Death Ray"), has 34 floors of office space and is topped off with eateries and a watering hole above. 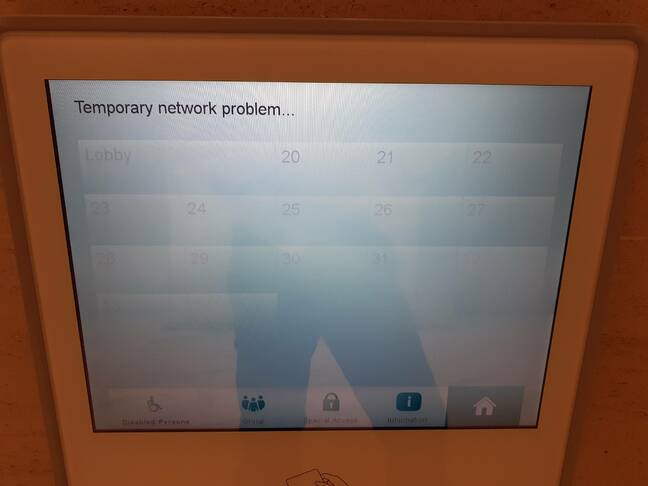 There's no word on whether Dyke was heading for a well-earned beverage at the top. Certainly, if we'd seen this error on the elevator screen, a stiff drink would have been second most on our minds after wondering how it is that a touchscreen is needed to operate machinery like this.

While we might be befuddled by printers that now insist on making a clean shutdown (and displaying a terse message on startup if the power is rudely yanked) or computer games that seem to require patching on a daily basis compared to the Atari VCS cartridges of old, we'd have to say the benefits of dispensing with buttons in favour of a touchscreen are marginal at best.

The words "Temporary Network Problem..." scream "You Had ONE Job" to us. Presumably the clever control panel can detect the card issued to the user and ensure only the relevant floors are selectable. Assuming the network is present.

As for why the network is not available, well – hopefully nobody cut the wrong cable (and let's face it – the words "cut", "cable", and "elevator" are rarely happy bedfellows). But at least the problem is temporary.

Unlike the Walkie Talkie building itself, which was the recipient of Building Design's Carbuncle Cup in 2015 and looks set to squat on the London skyline for a good few years to come. ®