Optimus Sub-Prime? For something meant to revolutionize production lines, reveal wasn't quite there yet

Tesla headlined its AI Day 2022 event on Friday with the reveal of its "Optimus" robot prototype, showing just how much work was left to do on the project.

While the demo was certainly more robotic than last year's dancer in a onesie, the lumbering mess of cables was far from the sleek and sexy design faithful Muskites might expect from the EV maker.

CEO and founder Elon Musk said before the curtains opened: "I do want to set some expectations with respect to our Optimus robot. As you know, last year it was just a person in a robot suit, but we've come a long way and, you know, compared to that, it's going to be impressive."

But in a world accustomed to the back-flipping bots of Boston Dynamics, Optimus was less than impressive. A mechanical engineer stepped in to inform the audience that this was the first time the robot was run "without any backup support – cranes, mechanical mechanisms, no cables, nothing." 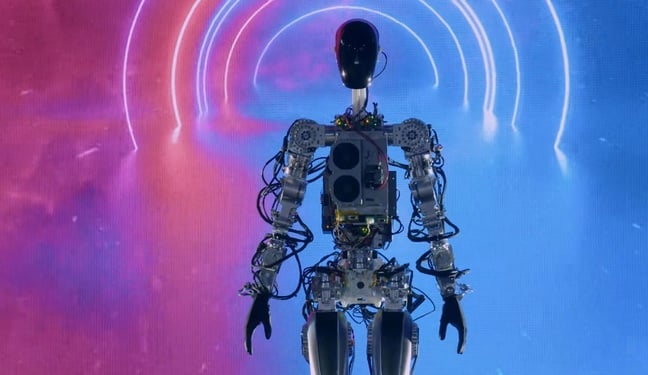 The prototype managed to rotate its arms, then tottered to the forefront to give the audience a wave, before walking back as a screen failed to close. "This is essentially the same self-driving computer that runs in Tesla cars by the way," an Autopilot engineer proclaimed.

The event then showed videos of the robot picking up and putting down objects, and watering plants. "What you saw ... was our rough development robot using semi-off-the-shelf actuators. But ... we actually have an Optimus bot with fully Tesla-designed and built actuators, battery pack, control system, everything."

This version, which was then pushed onto the stage, was a little more "Tesla" – slimmer, neater, shinier. Only one problem: it can't walk. "I think it will walk in a few weeks," Musk said, "but we wanted to show you something that's fairly close to what will go into production."

Clumsily wheeled out by staff, it also managed a couple more waves and did the splits from the rod on which it was mounted.

"Our goal is to make a useful humanoid robot as quickly as possible," Musk said. "We've also designed it using the same discipline we use in designing the car, which is to say to design a form of manufacturing such that it is possible to make the robot in high volume at low cost with higher liability.

"You've all seen very impressive humanoid robots demonstrations, and that's great, but what are they missing? They're missing a brain. They don't have the intelligence to navigate the world by themselves. They're also very expensive and made in low volume. Optimus is designed to be an extremely capable robot but made in very high volume – ultimately millions of units – and it's expected to cost much less than a car, so probably less than $20,000."

Accepting that there was "a lot of work to be done to refine Optimus and improve it," Musk said the aim of the event was convince more AI and mechanical engineers to join the company to bring the project "to fruition at scale" and "help millions of people."

He then waxed lyrical about an economy where there was "not a limitation on capita," which could then become "quasi-infinite," implying that he hopes Tesla's robots might one day replace humans on production lines.

"This means a future of abundance," he said. "A future where there is no poverty, where you can have whatever you want in terms of products and services. It really is a fundamental transformation of civilization as we know it."

As if to reference his belief that AI is humanity's "biggest existential threat," he added: "Obviously, we want to make sure that transformation is a positive one and safe," claiming that Tesla's public ownership model was the right way to achieve this.

While not quite the disasterpiece of the Cybertruck reveal, going by what was shown at the AI Day, such a utopia is still far away. ®