But it was the final demonstration that showed an absolutely killer app for HoloLens, and as a space geek myself it blew my fuses. Microsoft and NASA's Jet Propulsion Laborator have used photographs from the Curiosity Mars rover to build 3D landscapes of the Red Planet, and JPL will use the system to map the rover's course from now on.

JPL currently uses a 2D system of LCD screens to get a feel for Curiosity's immediate surroundings. It's a huge help in navigating the rover's course and identifying spots of special scientific interest, but it does have serious limitations.

The HoloLens system, on the other hand, is superb. It felt almost like being there. Everywhere you looked was 3D Martian landscape, and behind you stood Curiosity itself. Bending down you could peer under overhanging rocks, by tapping on certain areas of the map you could focus in on specific areas, and you could walk around within the limits of the room. 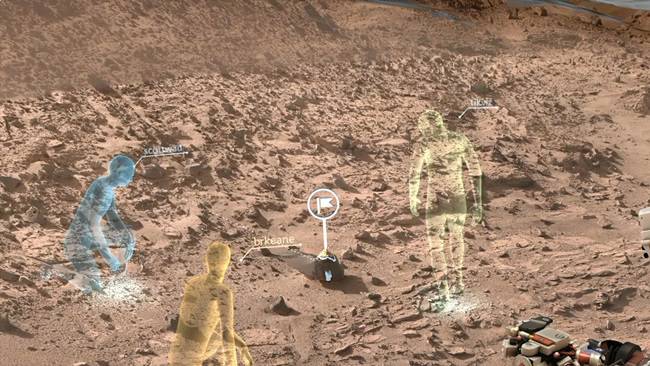 After a few moments of such exploration, one of JPL's geologists called in and appeared onscreen as a glowing humanoid avatar. He pointed out how you could see the light-colored sedimentary rocks that formed the once-wet Yellowknife Bay, and an dark igneous rock sitting in the middle of it. Looking up, you could see the crumbling outcrop of similar rocks higher up the slope, showing where the black volcanic chunk had rolled from.

There was a gap in the marvelous Martian landscape, however. The HoloLens software had been used to scan a real-world PC that was sitting in the room so that you could see it, but not the desk it was sitting on. You could walk over and use the monitor – and the mouse and keyboard with peripheral vision – and input data and results from the rover.

JPL and Microsoft have been working on this for about a year, they said, and there's still some work to be done to get all the information from Curiosity onscreen. You could only enhance the landscape imagery in specific areas, for example. Also, to a purist, the rover's image seemed jarringly touched up. Curiosity's now-punctured wheels looked completely intact and the machine wasn't caked with Martian dirt.

Nevertheless, the demo was both a stunning spectacle and a very useful tool for NASA. The 2020 Curiosity 2.0 rover should be studded with more cameras to take even better advantage of the system, but it's down here on Earth that HoloLens should see a more immediate return.

Imagine a theme park where instead of unrealistic-looking journeyman actors you got the actual cartoon Elsa from Frozen bursting out of the landscape, singing "Let it Go." Or a warehouse full of FPS players with mock guns and headsets blowing each other to smithereens – done right, HoloLens could have punters queuing up around the block. Add an option to go full-screen with the headset and you're heading into Better than Life territory.

Within minutes of wandering around a virtual Mars I gave a rather excitable interview about my experience with the HoloLens. In the cold light of day, it's still "bloody marvelous" in a lot of ways, but it's clear Microsoft has a way to go on this.

The principle problem is the hardware involved. Remember that snazzy black headset? One was on display in a glass case in the demonstration section, and it's difficult to see how it would be practical for real-world use. 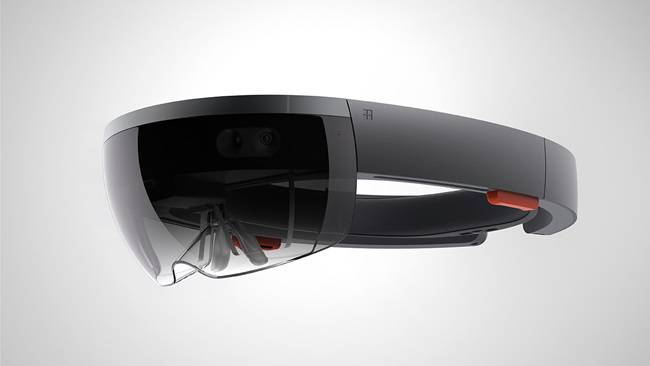 Looks good, but the specs don't add up

During the keynote, Kipman explained that the HoloLens uses three processor cores: a CPU, a GPU, and what he called a holographic processing unit. These must require a fair amount of power, not to mention cooling (judging from the demonstration units), but the futuristic keynote headset had no air vents.

The keynote headsets also came without a power pack. Going by the dimensions of the headset on display, either Microsoft has made some astounding advances in battery power density or the keynote prototype has a battery life measured in mere minutes.

This isn't a deal-breaker. The demonstration units were good enough to sell at a theme park today, with a bit of refinement – and a headset you had to plug in would still sell. But HoloLens is still a lot farther away, it seems, from becoming a full-fledged commercial product than either Google Glass or Oculus Rift.

Yet HoloLens also has clear advantages over either of those products. Oculus Rift blinds the user, fixing them in a near-static position, and interaction with the images displayed isn't intuitive. Glass, on the other hand, is really just a mini-screen mounted on specs, and it doesn't give the immersive feel of HoloLens. That might explain, however, why Google was willing to spaff out over $542m for Magic Leap, which uses a similar system to HoloLens.

Another factor is cost. Microsoft gave no indication about possible pricing for HoloLens, nor the exact components used, but you can bet the first batch of headsets won't be cheap enough for the mass market.

Microsoft is including the HoloLens APIs in the Windows 10 operating system and, once it gets the hardware sorted out, third-party developers should have a field day creating new uses for the platform in industry-specific sectors. The heads-up display market could get comprehensively pwned, for example.

Give it a few more years of development and Microsoft could have something rather good on its hands. The firm has generally been good at building decent hardware (even the Zune wasn't a bad piece of engineering) and the HoloLens system could be a very useful bit of kit.

Will it replace the keyboard and mouse or the computer monitor, one reader asked? Almost certainly not, at least not in the next decade or so. But this kind of augmented reality system, could be a dramatic shift in the way we interact with the online world, particularly if it could scale to larger viewing sizes.

Reporting on technology will make anyone a bit grizzled and cynical over time, but occasionally something comes along that just blows you away. HoloLens is the fourth such creation to make this hack say "Holy f**k!" (in a good way) in the last two decades. ®