Beware the ghost of operating systems past: In which our hero is visited by an old friend

12BoC With the Twelfth Night approaching, we finish our 12 Borks of Christmas* (12BoC) series by waxing a little Dickensian as the ghost of operating systems past pays a visit.

Spotted by Register reader Don Harwood at the platform of Radley (near the UK city of Oxford) a while ago, the Help Point seems to be in need of help.

Our reader noted that the hardware doesn't appear to have changed in the months since the borkage and those specs look a little weedy for Microsoft's latest and greatest. A reminder, perhaps, of how frugal Windows XP now seems compared to the bloatfest of today's Windows.

Except, in this case, XP is bleating about virtual memory. 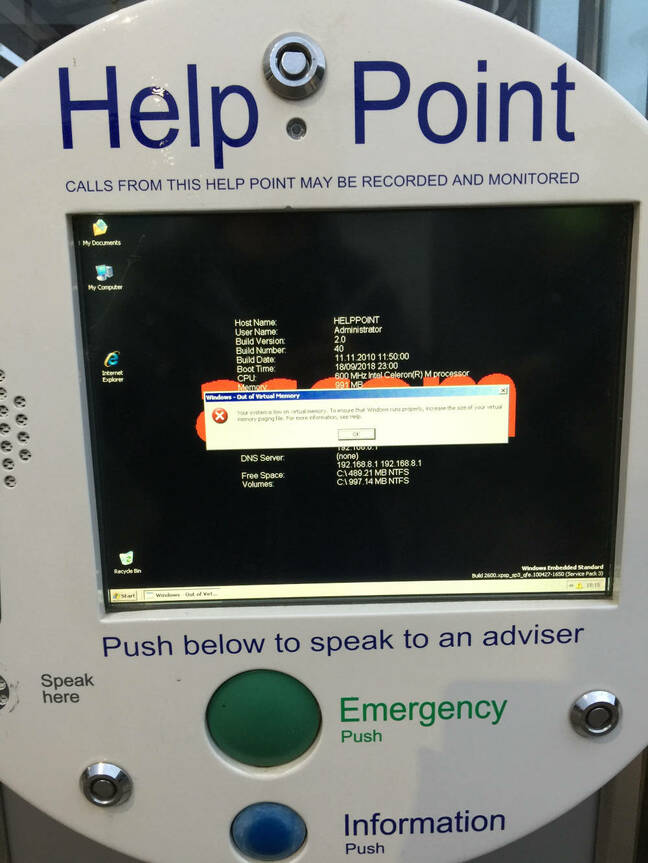 The error is all too familiar to Windows users and can often lead to some tinkering with the paging file size or a full-on hardware upgrade (or a hunt for what is chewing through the memory). It doesn't look like this bit of kit has been blessed with either large amounts of RAM or disk space.

"I pressed the button," explained Don, "and asked for help to increase the size of the virtual memory paging file, but needless to say they were unable to offer any assistance."

Heroic gesture. We're not sure we'd want to put our fingertips near either the buttons or that touchscreen. Then again, 2018 seems an awfully long time ago now. Indeed, XP was still on life support; Windows Embedded Standard 2009 didn't breathe its last until 2019.

Radley is not alone. Another reader spotted similar borkage at the delightful single-platformed Wargrave railway station, on the Henley-on-Thames branch line. 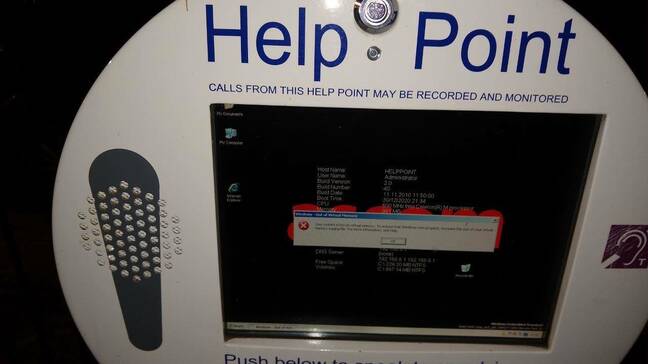 Snapped mere days ago on New Years Eve, Windows is again struggling with that pesky virtual memory. Still, at least it looks like the recycle bin has been moved, even if nobody has seen fit to upgrade the poor thing.

As for the Help Point itself, the machines appear to come from Trans Data Management and the interactive touchscreens are designed to funnel up-to-date information to passengers.

The kit, which can still be seen around the country, is "robust and hard-wearing" according to the firm.

If only the version of Windows running within could be the same. ®

Time to modem down,

and a server they said had ceased to be ♫